A screen capture is basically an image taken by your computer to record or capture visible items that are displayed on your monitor. This digital image is usually taken by running software on the computer device. Screen captures are usually used to demonstrate a meticulous problem, a program or even just to show others what you do on your computer. 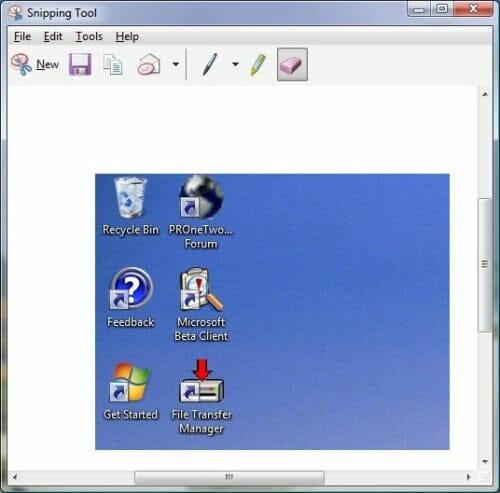 Just like its name, this screen capture tool is indeed fast. If speed is what you are looking for, than this tool may just be your answer. The special feature about this tool is that it is extremely responsive and it is lightweight. A handy feature that can be found in this tool is the colour picker, which can be used for easy colour sampling. This tool is modestly priced and very user friendly. 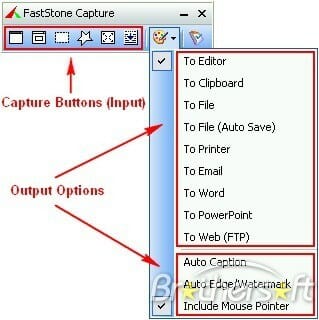 Snagit is yet another product by the TechSmith Company. This tool certainly does not disappoint. Slightly higher is price compared to FastStone Capture, this tool is worth every cent. This tool allows you to capture both still images and frames from videos. You can also easily capture images from objects that are larger than the screen itself. It also has highly customizable features. You can organize your screen shots according to date, name or even tag-based searching. Snagit is a screen capture tool that is definitely here to stay! 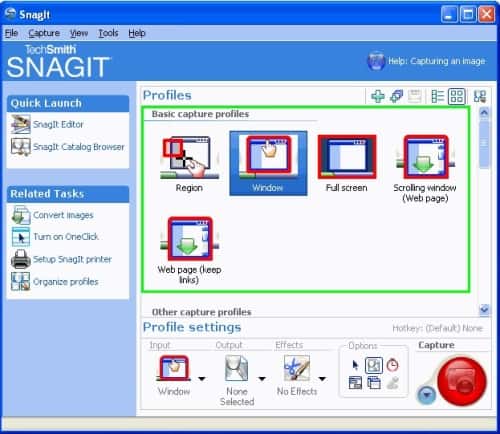 FullShot 9.5 is a well- established screen capture tool for Windows users. The newest version of FullShot has more special features plus a contemporary look. The best feature about this tool is that you can capture screen easily using buttons on the window title bar. The file sizes can be minimized to optimize color palette. This tool also supports concurrent editing of multiple screen captures. The FullShot screen capture tool has been around for quite some time. It has been dubbed a popular tool with a great track record. As a conclusion, this tool is more than capable of being user-friendly and can successfully automate screen capture process. 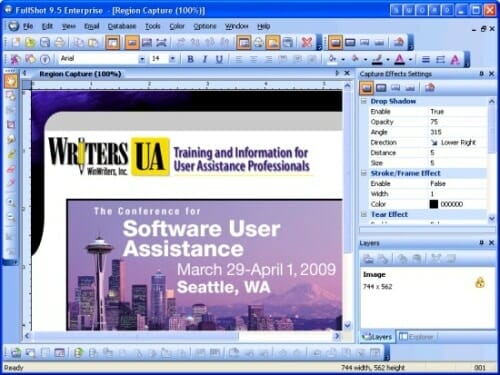 RoboScreen Capture 2 has an impressive array of features. The features include the ability to add raster-based captions to capture an image. Although RoboScreen had been compared to be similar to HyperSnap version 6.7. When you capture a screen, the image is automatically saved within the Help project directory. This is then inserted into the current topic. This helps you to potentially save several steps and save time too. The advantages of this tool include the wide range of capture options and its tight integration with Adobe RoboHelp. 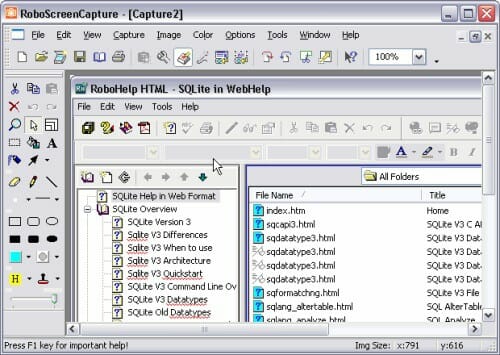 HyperSnap is also a popular screen capture tool among users. It has been dubbed a “mature” screen capture tool. The special feature about this tool is that you have a high level control over the final image. You can determine the colour depth, colour palette and even the compression. Another advantage is the Help system of this tool. Users get useful and comprehensive help for any problems that you might have. 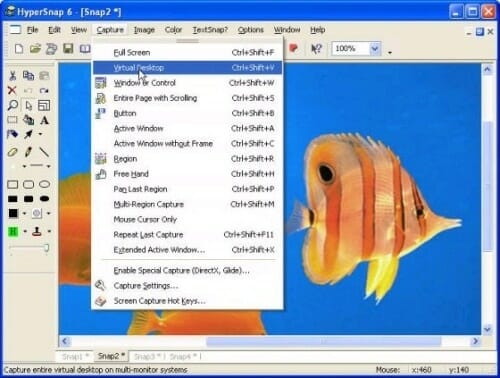 The newest version on this screen capture tool has many new enhancements. Among them is a range of new drawing ability. With MadCap Capture, you can be initiated quickly and easily. The strengths of MadCap Capture is that it is powerful and has a multi-layered vector-based image editor. The integration of MadCap Capture together with MadCap Flare is important to support “single-sourcing” and print – oriented image formats. 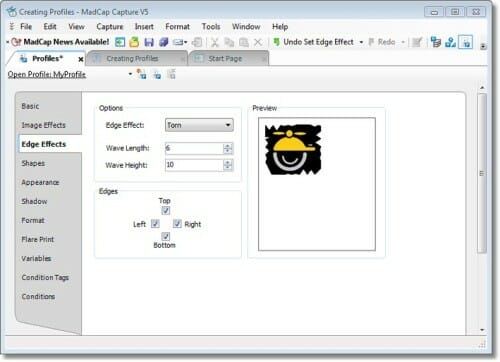 This tool is good for those of you looking for a basic capture tool. The best thing about this tool is that it is absolutely free. It is also one of the most popular tools among users. This tool is a favorite among users because it can be downloaded easily and for free. The only disadvantage you might face while using this application is that it does not support a .png output. Most users have commented that they like using ScreenHunter 5.1 just because of the simplicity of the interface. If you want a screen capture tool that is free and has only the basic applications, then this is the tool for you. You can download it for free on the Internet. 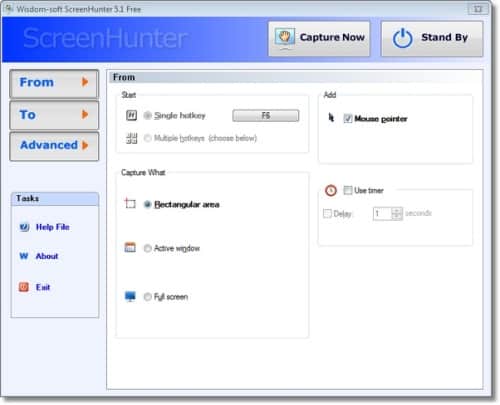 Experts dub this tool the least extensive tool apart form ScreenHunter. Although it has a simple array of features, it is quite a satisfying tool. It is easy to use and offers online help for first time users as well as users who face problems in the process. The benefits of using this tool is that it is easy to use and has a wide range of capture types and tools. However, some users have complained that it does not support capturing individual buttons or cascading menus. 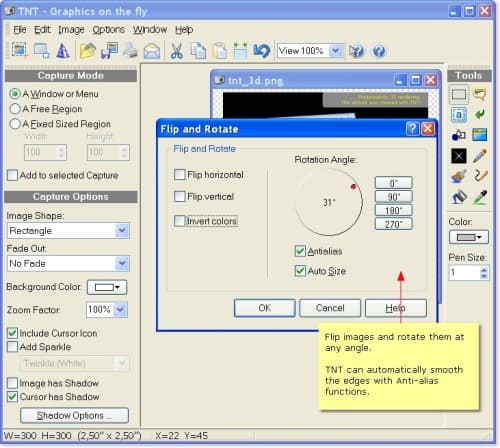 Another really great screen capture tool is Jing for Windows and Mac. This tool is also free. A software company known as TechSmith produces the Jing screen capture tool. This is the same company that produced another popular screen capture tool, which is Snagit. The special feature about Jing is that it works quickly. You can get the job done in a matter of seconds. The basic addition of Jing is free. But is you want an upgrade; it is not that expensive as well. The upgrade, known as Jing Pro is modestly priced. Jing uses basic and easy –to – use tools. 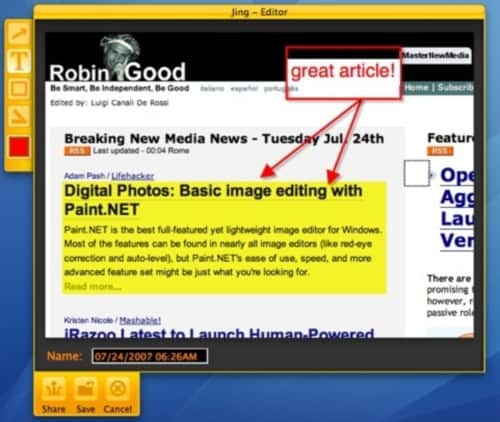 The Constrictor is a screen capture tool that can be used by Macintosh users. The special feature that users will find interesting is that this tool allows you to position a frame over the exact area that you want to snap. It also allows you to customize the snapped image. Effects such as framing and feathering are other special features you will find handy in this tool. 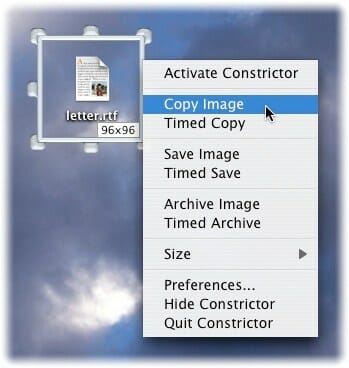 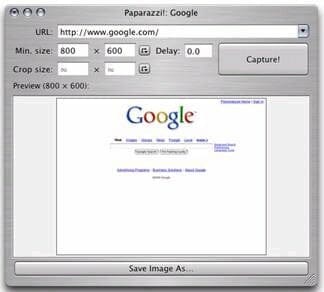 The Copernicus tool is another screen capture tool for Macintosh users. The special feature about this tool is that it can be used for screen capturing and also screen movies. It is also a favorite among Macintosh users because of its “all-in-one” special applications. Also, you may want to opt for this tool because it is absolutely free and downloadable on the Internet.

This newest screen capture tool for Mac is making quite the headlines these days. The reason being is, iShowU for Macintosh users is a great tool and is also popular among youngsters. This tool has a special feature that not many other screen capture tool has. The special feature is that this tool allows you to capture anything on a screen along with audio. However, the audio must be from a compatible source such as a microphone. Audios from Macintosh itself can be captured also. 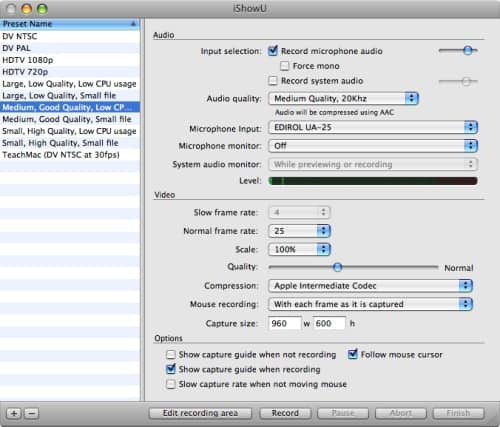 This screen capture tool is quite a convenient tool for Macintosh users. Reviews on this tool dub this as a tool with a twist. Why? You might ask. Well, this screen capture tool allows you to save the entire display on your screen as a PSD file. This tool is called Layers because each window that it captures is known as a layer. These include menus, dock, desktops and even icons. 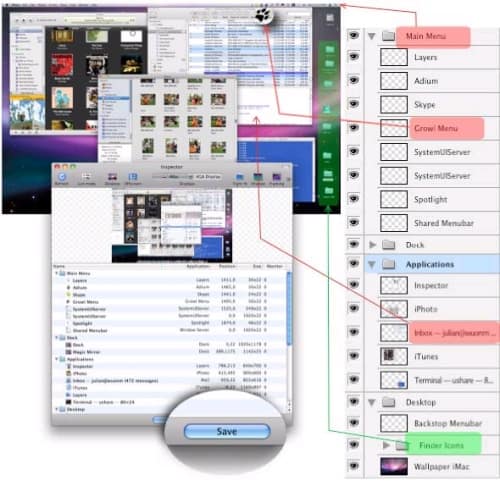 This tool was formerly known as LeeLou. This tool is unlike other screen capture tools because you can create animated demos with the screens you have captured. These animated demos are known as ‘viewlets”. These viewlets can be played back in any java-enabled browsers without plug-ins. Windows and Linux users can also use this tool. 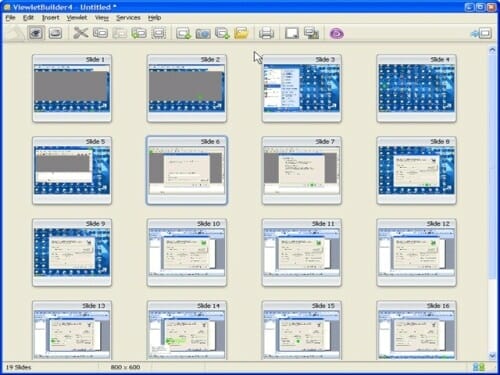 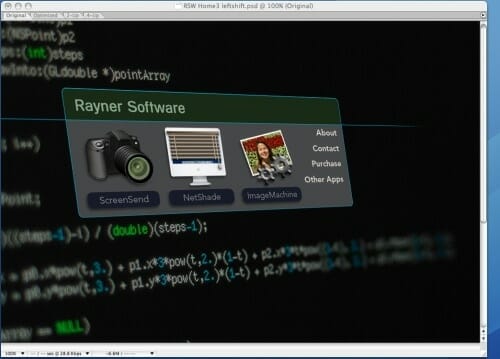 ScreenShot Pro is another screen capture tool for Macintosh users. It allows you to capture a screen by using cross- hairs to select the area that you want. After that, all you need to do is preview the file and save it in any format you want. For example, JPG, PICT, BMP and TIFF. 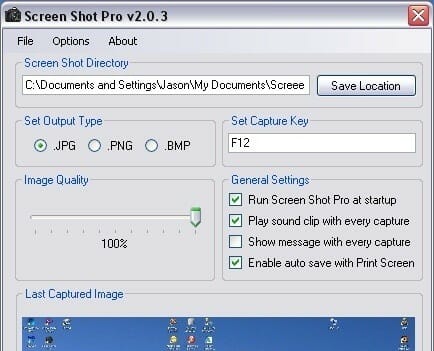 This tool is specialized for Mac OS X users. It is almost similar to ScreenShot Pro. The only difference is that it is free and downloadable. Among its special features is the ability to show a full screen window with solid colors. 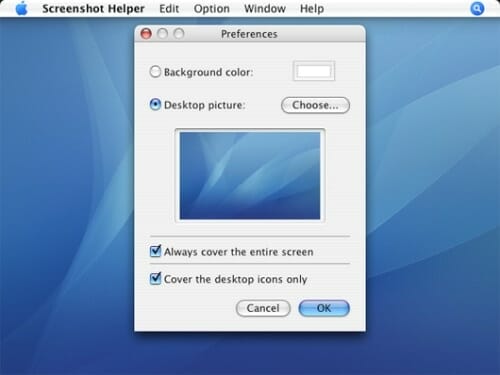 This tool is also a favorite among Macintosh users. This is because it captures your screen and saves it as movie. The format of the movie is QuickTime and MPEG-4. Another special feature is that allows you to take screenshots 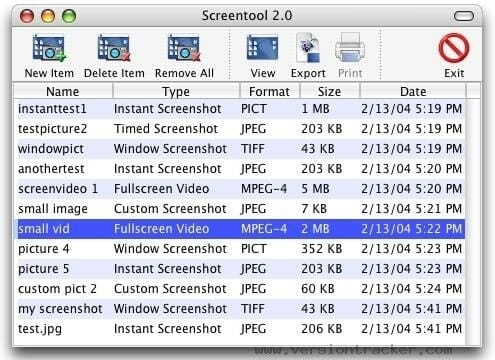 ScreenShot Plus is a screen capture tool is special for Macintosh OS X. This application uses Apple’s tools to capture a screen. It allows you too to scale the captured screen. Among the formats that you can use is PSD, JPEG and TIFF. 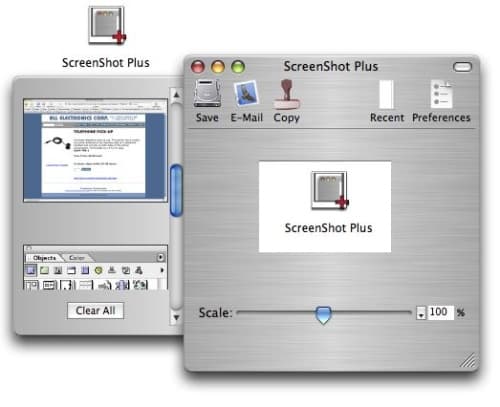 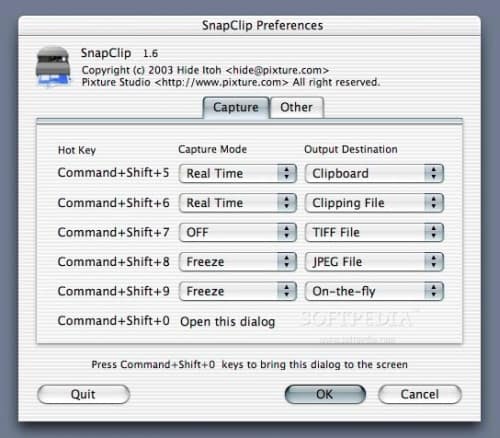 SnapNDrag is a screen capture tool for Macintosh OS X users. Users love to use this version because of the convenient ways to capture a screen. It is also a favorite because it is free and easy to download. The output of this application can be saved in a number of formats such as PNG, PDF and even JPEG. 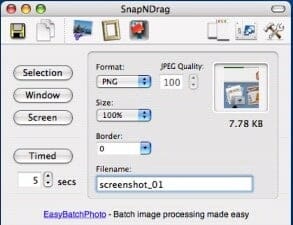 SnapWeb is a convenient application for Mac users. It creates screen captures of web pages. The special feature is that you can save web pages even if you screen is minimized. The entire page content can be showed at once. The formats for the output can be either JPEG or PDF files. 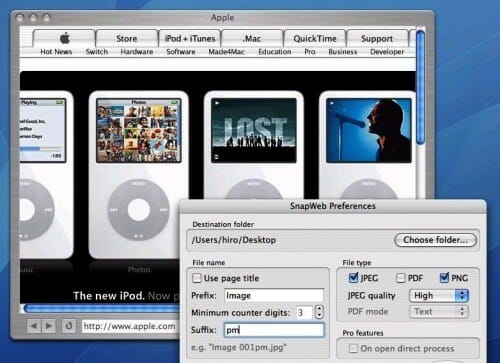 This is another tool for Macintosh users. This tool could be your choice because your screen captures can be made into a movie via Quick Time Movie. Other formats for the output includes a wide choice between TIFF, JPEG, GIF, PICT and even PNG. Printing of screen captures is also made easy with this application. 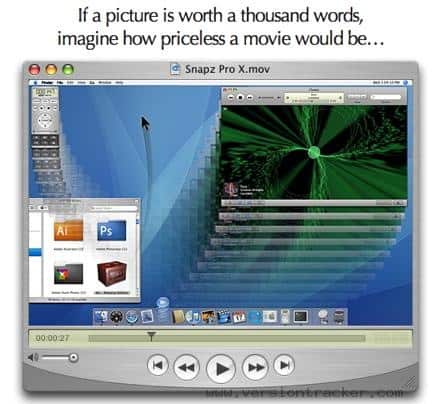 Like EasyCopy Gold, this tool also provides a wide variety of tools to manage graphics. It also allows advanced screen captures of windows or the entire screen. 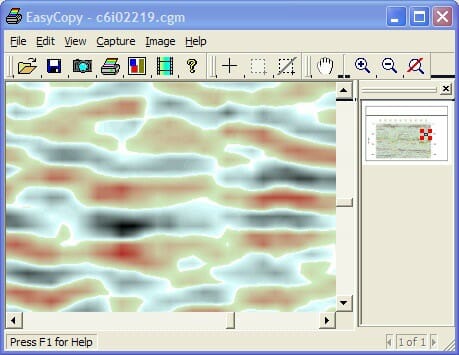 This tool is user friendly and very easy to use. You can resize and edit you screen capture the way you want it. There is also an array of editing tools that you can utilize. The best part is that any average user without any help can use these tools. 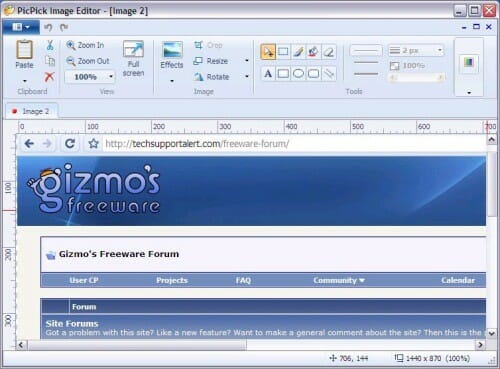