Firefox is one of the most preferable web browsers worldwide with a numerous number of active users. Twitter is a remarkable social networking service that has become many people’s favorite in a short duration of time and has millions of users registered to it. There is no doubt why people would like to merge these two great internet services together.

Twitter plugins has made twittering much simpler. It is more preferable as people are able to received updates and notifications’ instantly regarding what is happening in their Twitter. One will be able to multitask to keep up his/her hectic work in the Firefox browser and receive Twitter updates as well, without needing to log-in into their Twitter account.

Previously, we went through a lot of useful Firefox plugins such as Firefox SEO Tools for Bloggers and also Firefox extensions for web designers and developers. This is yet another series of Firefox plugins for Twitter lover!

These are our favorite 10 Firefox Twitter addons which you could use to tweet, reply tweets, show people what you are currently viewing, send direct messages, and much more features! Have a look at all this plugins and enjoy the freedom of using Twitter in your Firefox browser.

Echofon, which is previously known as TwitterFox, is a great Firefox plug-in to be used. It adds a minute status bar icon that has notification when your buddies post tweets. Echofon allows you to access your Twitter account in just a single click and it displays the number of unread messages on the status bar. You will be able to manage multiple Twitter accounts and other trouble-free Twitter functions such as posting your own tweets, direct message and retweet. 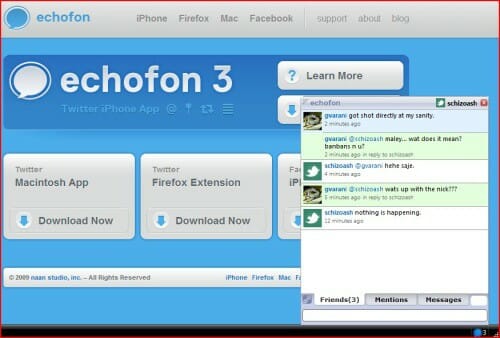 Twitbin is a petite Firefox plug-in which appears as a sidebar. It allows you to be up to date with all of your Twitter discussions right from the sidebar of your browser. You will be able use this extension to send and receive messages to and from your buddies, view conversations, share links of website you like, and more. 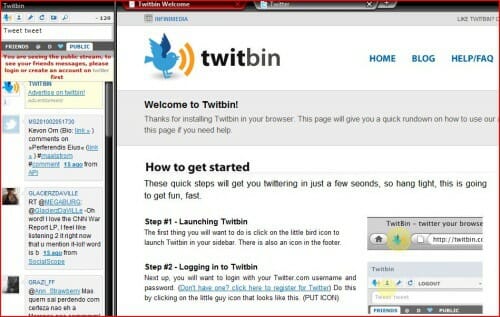 The Power Twitter offers extra functionalities to the Twitter web interface which includes an inline of all sorts of playable and viewable media, photo uploading, link expansion and shrinking, link translation to page titles, status history peeks, custom settings, and daily questions. All this could be done right on your Twitter web interface. As an added advantage, you will be able to view your Facebook status updates via this plug-in. 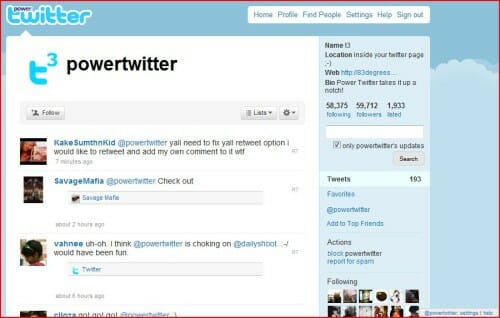 Twitkit functions as a Twitter sidebar for your Firefox browser. It has a 6-segment interface, which uses tabs to separate its contents. Using this Twitkit extension, you will be able to view your user timeline, the Twitter public timeline, your buddies list and latest tweets, your followers list and their latest tweets, status regarding your account, and @replies made to you. 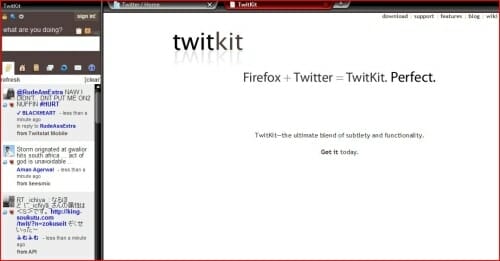 The TwitterBar extension allows you to tweet your message to the Twitter web interface directly from your Firefox’s address bar. A small Twitter icon would be noticeable at the side of the address bar, and clicking on it posts your tweets. You can also check the number of characters left as you are only allowed to post up to 140 characters long in Twitter. You could also tweet a URL of your currently viewing page by just clicking on the icon. With this TwitterBar version of 2.9, you can now add new accounts and post multiple Twitter accounts.

You can now post longer messages with more than just 140 characters on your Twitter web interface by using this Twitzer plug-in for your Firefox browser. Besides, it expands TinyURL links to ensure that you click on safe links.

Instant Tweets is almost similar to the TweetBar extension. You can tweet from your Firefox address bar and share links of the page that is currently being viewed. Just click on the bird icon that sits on the side of your address bar to share or tweet the particular link. It also automatically displays the number of character left as you type and shortens long URLs. All you have to do is right click on images to tweet it on Twitter instantly. Additionally, the bird icon will be noticeable in blue colour if someone is following you and turns red if no one is.

A music lover will definitely want to share their favourite songs and tracks that they are listening to with their buddies and other followers. This could be done by using the TwittyTunes extension for Firefox. It posts websites that you often visit and videos you stream to your Twitter. You could submit any songs you specify with just one click by assigning TwittyTunes to your Firefox browser. 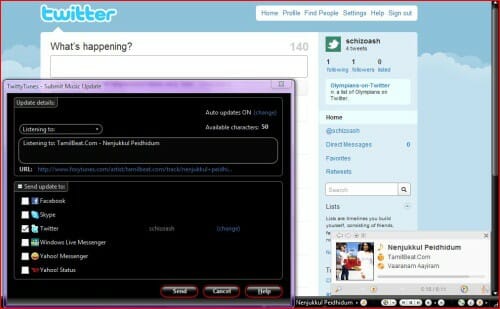 Friendbar is a useful application for not only Twitter but also Facebook. This Friendbar application allows you to manage both popular social networking web interfaces from one place. You can now keep in touch with your buddies from both networks with this single plug-in. It continually streams updates from both your Twitter and Facebook accounts right on the toolbar. Tweet, retweet, direct message, @message, and more from the Friendbar toolbar. It automatically generates a TinyURL of the website that you are viewing so that you could easily share the links on both the social networks.

Yoono is another sidebar plug-in for Firefox. It allows you to stay connected with your buddies across a variety of instant messengers and social networking websites from one place. The Yoono sidebar supports services like Twitter, Facebook, Flickr, MySpace, Yahoo IM, AIM and more. Yoono simplifies your way of sharing stuffs you like with all your social networks simultaneously. You will be able to discover more cool stuffs with the discovery widget that displays the related websites, videos, images, and more as you surf the internet. 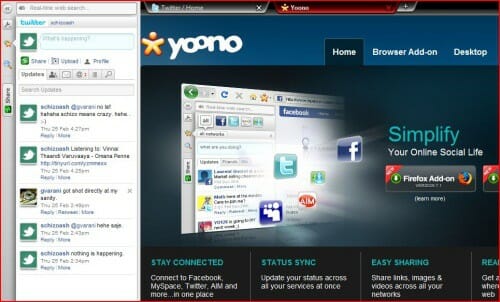 4(Easy) Ways On How to Receive Donations on...

8 Effective Ways on How to Become a...

Successful Guide on How to Become a Microsoft...

Prepare Yourself For The After Effects of Guest...